Academy Award-winning actress Marion Cotillard was born on September 30, 1975, in Paris. Cotillard is Jean-Claude Cotillard’s daughter, an actor, playwright, and director, and Niseema Theillaud, an actress and drama teacher. Her father’s family is from Brittany.

Raised in Orléans, France, she made her acting debut as a child with a role in her father’s plays. She studied drama at the Conservatoire d’Art Dramatique in Orléans. After small appearances and theater performances, Cotillard had occasional and minor roles in TV series such as Highlander (1992) and Extrême limite (1994). Still, her career as a film actress began in the mid-1990s. While still a teenager, Cotillard made her cinema debut at the age of 18 in the film L’histoire du garçon qui voulait qu’on l’embrasse (1994) and had small but noticeable roles in films such as Arnaud Desplechin’s My Sex Life… or How I Got Into an Argument (1996) and Coline Serreau’s comedy La Belle Verte (1996).

In 1996, she had her first lead role in the TV film Chloé (1996), playing the title role – a teenage runaway forced into prostitution. Cotillard co-starred opposite Anna Karina, the muse of the Nouvelle Vague.

In 1997, she won her first film award at the Festival Rencontres Cinématographiques d’Istres in France, for her performance as the young imprisoned Nathalie in the short film Affaire classée (1997). Her first prominent screen role was Lilly Bertineau in Gérard Pirès’s box-office hit Taxi (1998), a role which she reprised in two sequels: Taxi 2 (2000) and Taxi 3 (2003), this role earned her first César Award nomination (France’s equivalent to the Oscar) for Most Promising Actress in 1999.

In 1999, Cotillard starred as Julie Bonzon in the Swiss war drama War in the Highlands (1998). She won the Best Actress award at the Autrans Film Festival in France for her performance in the film. In 2001, Marion starred in Pretty Things (2001) as the twin sisters Marie and Lucie and was nominated for her second César Award for Most Promising Actress.

Cotillard’s breakthrough in France came in 2003 when she starred in Yann Samuell’s dark romantic comedy Love Me If You Dare (2003), in which she played Sophie Kowalsky, the daughter of Polish immigrants who lives a love-hate relationship with her childhood friend. The film was a box-office hit in France, became a cult film abroad, and led Cotillard to bigger projects.

Her first Hollywood movie was Tim Burton’s Big Fish (2003), in which she played Joséphine, the wife of William Bloom (played by Billy Crudup). A few years later, Marion starred in Ridley Scott’s A Good Year (2006), playing Fanny Chenal, a French café owner who falls in love with Russell Crowe’s character. In 2004, she won the Chopard Trophy of Female Revelation at the Cannes Film Festival. In 2005, Cotillard won the César Award for Best Supporting Actress for Tina Lombardi’s performance in Jean-Pierre Jeunet’s A Very Long Engagement (2004).

In 2007, Cotillard received international recognition for her iconic portrayal of Édith Piaf in La Vie En Rose (2007). Director Olivier Dahan cast Cotillard to play the legendary French singer because to him, and her eyes were like those of “Piaf.” She can sing also helped Cotillard land the role of “Piaf,” although most of the singing in the film is Piaf’s. The role won Cotillard the Academy Award for Best Actress and a César, a Lumière Award, a BAFTA Award, and a Golden Globe. That made her only the second actress win an acting Oscar performing in a language other than English next to Sophia Loren (Two Women (1960)). Only two male performers (Roberto Benigni for Life Is Beautiful (1997) and Robert De Niro for The Godfather: Part II (1974)) have won an Oscar for solely non-English parts. Trevor Nunn called her portrayal of “Piaf” “one of the greatest performances on film ever.” At the Berlin International Film Festival, where the film premiered, Cotillard was given a 15-minute standing ovation. When she won the César, Alain Delon presented the award. He announced the winner as “La Môme Marion” (The Kid Marion), he also praised her at the stage, saying: “Marion, I give you this César. I think this César is for a great actress, and I know what I’m talking about”.

Cotillard has worked much more frequently in English-language movies following her Academy Award recognition. In 2009, she acted opposite Johnny Depp in Michael Mann’s Public Enemies (2009). Later that year, she played Luisa Contini in Rob Marshall’s musical Nine (2009) and received a Golden Globe nomination for her performance. Time magazine ranked her as the fifth-best performance by a female in 2009. The following year, she took on the main antagonist role, Mal, in Christopher Nolan’s Inception (2010), and 2011 she had memorable parts in Midnight in Paris (2011) and Contagion (2011) and reteamed with Christopher Nolan in The Dark Knight Rises (2012).

In 2011 and 2012, respectively, Cotillard appeared on the top of Le Figaro’s list of the highest-paid actors in France; it was the first time in nine years that a female topped the list. Cotillard was also the highest-paid foreign actress in Hollywood.

In 2012, Cotillard received wide-spread critical acclaim for her role as the legless orca trainer Stéphanie in Rust and Bone (2012). The film was a box office hit in France and received a ten-minute standing ovation at the end of its screening at the 65th Cannes Film Festival. Cotillard won the Globe de Cristal (France’s equivalent to the Golden Globe), the Étoile d’Or award, and was nominated for the Golden Globes, SAG, BAFTA, Critics’ Choice, and César Awards for her performance in the film. Cate Blanchett wrote an op-ed for Variety praising Cotillard’s performance in “Rust and Bone,” the two actresses competed for the Academy Awards for Best Actress in 2008, Cate was nominated for her performance in Elizabeth: The Golden Age (2007) and Marion for her performance in La Vie En Rose (2007) and Cotillard won the Oscar.

She had her first leading role in an American movie in 2013, in James Gray’s The Immigrant (2013), in which she played Ewa Cybulska, a Polish immigrant who wants to experience the American dream. Cotillard received wide-spread acclaim for her performance in the film at the 66th Cannes Film Festival, where the film premiered and won several critics awards. In 2014, Cotillard played Sandra in the Belgian film Two Days, One Night (2014) by the Dardenne brothers. Her performance was unanimously praised at the 67th Cannes Film Festival, earned several critics awards, won her first European Award for Best Actress, and received her second Oscar nomination and her sixth César award nomination.

In 2015, she played Lady Macbeth opposite Michael Fassbender in Justin Kurzel’s Macbeth (2015). She voiced two animated movies: The Little Prince (2015), in which she voiced The Rose and April, and the Extraordinary World (2015), in which she voiced the lead role, Avril. Her 2016 included Nicole Garcia’s From the Land of the Moon (2016), Xavier Dolan’s It’s Only the End of the World (2016), Justin Kurzel’s Assassin’s Creed (2016), in which she worked again with her Macbeth co-star Michael Fassbender; and Robert Zemeckis’s Allied (2016), with Brad Pitt. 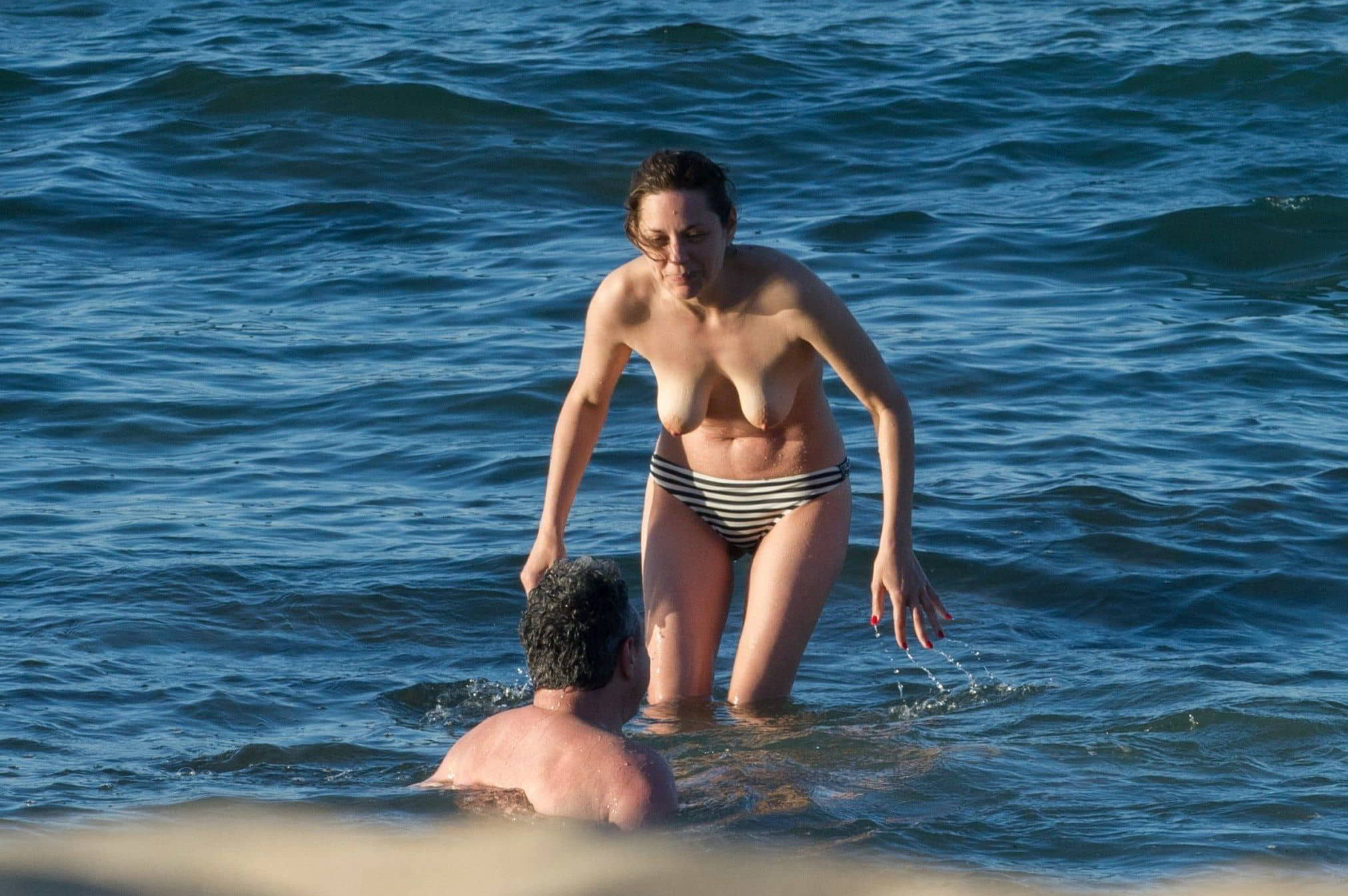 French actress Marion Cotillard topless swimming on the island of Fuerteventura. Considering Marion is 40, I must say she looks really great.